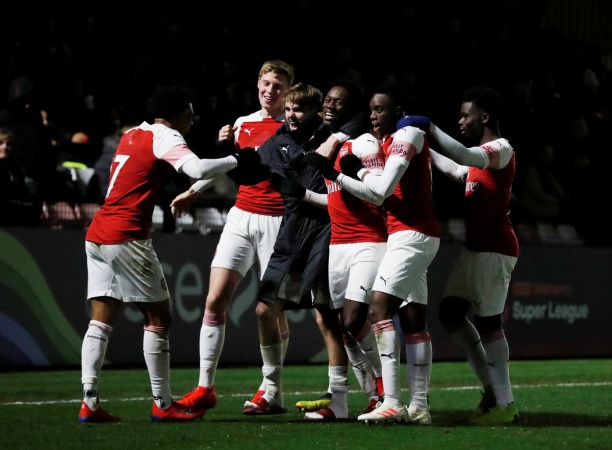 Folarin Balogun grabbed a hat-trick, as Arsenal came from a goal down, to beat Blackburn Rovers 3-1 in their Premier League 2 Division 1 opener at the Lancashire FA HQ on Monday evening.
Tolaji Bola, James Olayinka and Balogun started the game for the young Gunners.
Fit-again central defender Joseph Olowu replaced Rob Holding 17 minutes into the second half.
Arsenal made it 1-1 before the break, when Balogun slotted home the rebound after a penalty he won was saved by goalkeeper Joe Hilton.
With seven minutes left on the clock, the Nigerian striker won another penalty for his side and this time he didn’t make any mistake to give the Gunners a 2-1 lead.
The 18-year-old went home with the match ball, after netting the third with almost the last kick of the game.
Balogun has now scored four hat-tricks for Arsenal youth teams in the U18 Premier League and Premier League 2 since the start of the 2018/2019 season.
Culled from Daily Trust By Ifreke Inyang

Why didn’t our new signings start at Newcastle?